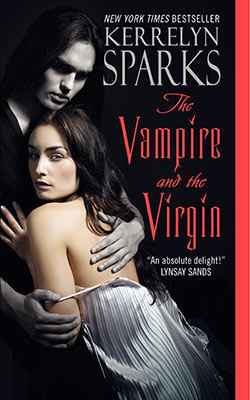 The Vampire and the Virgin

FBI psychologist Olivia Sotiris is looking for a cool ocean breeze, sand between her toes, and a break from her crazy, and sometimes dangerous, life. But when she escapes to the Greek island of Patmos, all she gets is a meddling grandmother trying to marry her off. None of the men there interest her—except a mysterious Scotsman named Robby MacKay.

Robby needs to cool off, too, since all he can think about is revenge on the Malcontent bloodsuckers who once held him captive. But then he meets Olivia, the beauty with wild curls and a tempting smile. When a deadly criminal from one of her cases back home tracks her down, Robby will have to save her life, along with giving her a first time she’ll never forget …

“I have long thought of these books as the Stephanie Plum series with fangs! …If you love paranormal romances that are passionate and exciting with doses of laugh out loud moments sprinkled in, do yourself a favor and pick up this one and the rest of the series. You will be very glad you did! Kerrelyn Sparks is a mega talented author and I hope to see this series continue for many, many books to come!"

“The Vampire and the Virgin offers a fresh, funny, downright romantic reinvention of the virgin-meets-vampire plot.”

“This is a definite novel to read time and again, one that will leave you craving more from this amazing author. I love how Kerrelyn Sparks brings paranormal romance to a whole new level!”

“If you love a book that’ll grab hold of your emotions and drag them all over the place The Vampire and the Virgin is the book for you…. With all the half vampire kids being born and highly entertaining were kitties next on the menu I’ll be eagerly awaiting the next book in this entrancing series Eat, Prey, Love in fall 2010 and the chance to fall in love with yet another of Ms. Sparks’ remarkable heroes.”

Olivia Sotiris is vacationing at her grandmother Eleni’s house on a Greek isle. It’s late at night, and they’re in the courtyard that overlooks the beach.

Eleni cinched the belt tighter on her blue terry-cloth bathrobe. “Tell me what’s troubling you, child.”

“I’m fine. Just jet lag and—-” Olivia stopped when she felt a flash of anger emanating from her grandmother. “Sorry. I’m used to telling people I’m fine when I’m...not.”

Eleni sighed. “I understand, but you should know better than to lie to me.”

Olivia nodded, relieved that her grandmother’s anger had quickly dissolved. She knew all about her grandmother’s strange gift, for she was the only grandchild to inherit it. They could both tell when a person was lying. And they could sense people’s emotions.

“I’ve known you all your life, but I’ve never seen you this...frazzled,” Eleni continued. “You were happy and relieved when you arrived, then you were annoyed with me during the party.”

Eleni waved a hand in dismissal. “No matter. That’s what family’s for. But there is something else troubling you. Something...dark. And hidden.”

Olivia groaned inwardly. It was hidden. She’d been repressing it for months. “There is a problem, but I--I don’t want to talk about it.” She took the blanket off the wall and wrapped it around her shoulders.

“It frightens you,” Eleni whispered.

Olivia’s eyes welled with tears. He frightened her.

Her grandmother looped an arm around her and pulled her close. “Don’t be afraid, child. You’re safe now.”

She hugged her grandmother and squeezed her eyes shut, willing the tears to go away. Yia Yia had always been the one she relied upon, the one she told her secrets to. When she was young and struggling to adjust to her empathic abilities, it was only her grandmother who understood.

Eleni patted her on the back. “Who is frightening you? Is it a man?”

“Did the bastard mistreat you? I could send your brothers after him to teach him a lesson.”

Olivia laughed. Her skinny younger brothers would have trouble intimidating a Chihuahua. As usual, her grandmother had chased away the tears.

“You just leave this to me. I’ll find a good man for you.” Eleni stepped back and tilted her head. “Did you like any you met tonight?”

Olivia groaned. “I’m not looking for a husband.”

“Of course you are. What are you, twenty-four? I had three babies by the time I was your age.”

Olivia grimaced. “I have a career. A master’s degree.”

“And I am proud of you. But nothing is more important than family. What did you think of Spiro?”

“The very handsome one. He was dancing on my right.”

Olivia thought back, but couldn’t remember a man who stood out. They had all congealed into a greasy blob of testosterone. “I can’t recall.”

“He’s a good boy. Goes to church every week with his mother. Very nice body. Does push-ups every morning in his underwear. Not too hairy.”

Olivia cocked her head. “And how do you know that?”

Eleni motioned toward the telescope.

With a gasp, Olivia noticed the telescope was not pointed toward the sky. She rushed over and peered through the eyepiece. A whitewashed wall came into view with a large window. “Yia Yia, what have you been doing?”

She shrugged. “I’m old, but I’m not dead. Spiro is a beautiful young man. And he takes good care of his goats. You should go out with him.”

Olivia wrinkled her nose. “What on earth would I do with a goat herder?”

Olivia snorted. “I can’t get married. I can’t even date worth a darn. It always ends up badly. I can tell when the guys are lying, and unfortunately, that’s most of the time.”

“We just need to find you an honest man.”

“I’m afraid those have gone the way of the dinosaur.” Olivia pointed the telescope away from Spiro’s home.

“Your grandfather was a good man, may God rest his soul.” Eleni crossed herself in the Orthodox fashion, touching her right shoulder first. “I’ll make you a cup of chamomile tea. It will help you sleep.” She hurried back into the house.

Olivia rested her elbows on the courtyard wall and gazed at the beach below. A breeze swept a tendril of hair across her face, and she shoved it aside. Most of her long hair was secured on the back of her head with a big claw clip, but as usual, there were always a few unruly strands that managed to escape.

She took a deep breath, savoring her solitude. There were times, like during the party that evening, when the constant bombardment of everyone’s emotions became hard to bear. It would feel like she was drowning, her own emotions submerged under the flood of those around her to the point that she feared losing herself entirely. She’d learned over the years to handle it, but still, every now and then she had to escape the maddening crowd.

Being an empath had certainly helped with her job. Unfortunately, her unique abilities had also caused the monster to become obsessed with her. Don’t think about him. You’re safe here.

A movement far to the left caught her eye. She turned toward a grove of tamarisk trees, but only saw them swaying with a breeze. Nothing strange there.

Then she saw him. A lone figure emerging from the dark shadow of the trees. He was jogging along the beach. At this time of night? He reached a clear, sandy expanse where the moon shone brightly, and Olivia forgot to breathe.

His body was beautiful, and she suspected his face was, too, but it was hard to tell at this distance. Dressed in dark jogging shorts and a plain white T-shirt, he moved quickly and easily along the beach. His skin seemed pale, but that could be caused by the moonlight.

She sucked in a deep breath as he came closer. He was a big man. His T-shirt was stretched across wonderfully broad shoulders, the short sleeves tight around his biceps.

If only she could see his face better. Her gaze drifted over to the telescope. Why not? She rushed over, pointed it in the man’s direction, and peered through the eyepiece.

Oh, yeah, he did not disappoint. His eyes looked sharp and intelligent. Pale, though she couldn’t tell the color. Green, she hoped, since that was her favorite. He had a straight, strong nose, a wide mouth, and a strong jaw with a sexy hint of dark whiskers. There was a grim expression on his face, but it didn’t make him unattractive. Quite the opposite. It added to his aura of masculine power.

He passed by the house, and she admired his sharp profile for a few seconds, then lowered the scope to his body. His chest expanded with each deep breath, and she found herself matching her breaths to his. Even lower, she noted his muscular thighs and calves. His white running shoes pounded on the sand, leaving a steady trail.

He continued down the beach toward the rock known as Petra, giving her a glorious view of his backside.

“Opa,” she muttered as she continued to spy on him through the telescope. She’d seen plenty of fit men during her training days for the bureau, but this guy put them to shame. While their muscles had seemed forced and clumpy, this guy looked completely natural, moving with an easy, graceful control.

She was still focused on his rump when she noticed the attached legs were no longer moving. Did he run out of steam? He hadn’t seemed tired. His jogging shorts slowly turned, affording her a long look at his groin. She gulped.

He was looking straight at her!

She jumped back, pulling her blanket tight around her. How could he see her? The courtyard was dark and the walls reached to her waist. But then the walls were whitewashed and she was cocooned in a white blanket, and the moon and stars were bright. Maybe he could see this far. Surely he hadn’t been able to hear her? She’d barely spoken over a whisper.

He stepped toward her, gazing at her with intense eyes. Oh God, he’d caught her ogling him with a telescope! She pressed a hand against her mouth to keep from groaning out loud. Apparently, the smallest of sounds was carrying across the beach.

He took another step toward her, and the moon glinted off his hair. Red? She hadn’t met any redheaded men at the party. Who was this man?

“Olivia,” Eleni called through the open door. “Your tea is steeping.”

She strode into the kitchen and waited impatiently for her mug of tea. “There’s a man on the beach.”

“Are you sure? It’s almost two in the morning.”

“Come and see. Maybe you know him.” Olivia wandered back to the courtyard and peered over the wall.

“He—He was there.” Olivia pointed south toward Petra. There was no sign of him anywhere.

Eleni gave her a sympathetic look. “You’re exhausted and seeing shadows. Drink your tea, child, and go to bed.”

“He was real,” she whispered. And the most beautiful man she’d ever seen. Dear God, please let him be real.