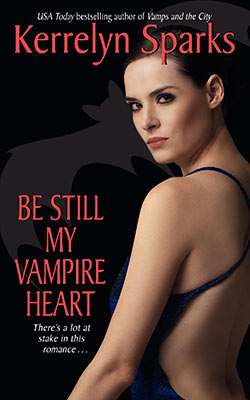 Be Still My Vampire Heart

When a beautiful mortal starts slaying vampires in Central Park, the Vamps call on their most powerful warrior to stop her—the general of the Vamp Army, Angus MacKay!

The war is on, but will it end in their destruction…or in total surrender to a passion for the ages?

Be Still My Vampire Heart is the third full-length novel in the Love at Stake Series.

“Sub-genre fans will want to take a bite out of this Big Apple supernatural delight and seek other sparkling 'supernormal' thrillers by this entertaining author (see VAMPS IN THE CITY and HOW TO MARRY A MILLIONAIRE VAMPIRE).”

“You can not help but to laugh out loud at the fun and clever bantering exchanged between the characters.  My heart soared and tears leaked from my eyes from the beautiful ending.  I can not wait to read more of Ms. Sparks’ captivating tales.”

“This is the third novel in the amazing vampire romance series by author Kerrelyn Sparks. Emma and Angus are two of a kind and a perfect match for each other in more ways than one. Perfect for readers who enjoy some feisty characters, a fast paced plot, and a lot of action.”

“Be Still My Vampire Heart is a hilarious and highly emotionally charged, very enjoyable read… Ms. Sparks has outdone herself with her Love-At-Stake series and I for one cannot wait to read the rest of it!

“Be Still My Vampire Heart is a must buy for vampire lovers, as it is sure to satisfy. Kerrelyn Sparks is without a doubt the master of the humorous vampire tale!”

“This was a terrific vampire story! Incredibly difficult to put down, the story has depth and stunning descriptions. The characters were excellently described, with the main characters having both honor, strength and their own biases. Kerrelyn Sparks is a fantastic writer!”

Be Still My Vampire Heart is funny, sexy, exciting and a blast to read!

I highly recommend Be Still My Vampire Heart to anyone who enjoys an offbeat paranormal romance that infuses a healthy dose of fun into the story. But do yourself a favor and pick up the entire series. You won’t be sorry. 5 clovers

It is the evening of St. Patrick’s Day, and Angus MacKay, the general of the Vamp army, has a new mission—- Stop the mortal who’s slaying vampires in Central Park.

Emma Wallace stomped her feet silently in the grass. The chilly air felt good as long as she was walking, but whenever she crouched behind a tree for very long, her legs grew stiff.

This part of Central Park was dead, even too dead for the Undead. Time to move on. She slung her canvas tote bag over her shoulder and enjoyed the comforting sound of wooden stakes clattering against one another. She slipped out of her hiding place and skidded down the sharp incline to the brick path below. Her movement startled some birds from a nearby tree. They cawed, beating the air with a fluttering of wings as they flew into the darkness.

Emma waited, blending easily into a tree’s shadow with her black pants and jacket. All was quiet once more. Hard to believe that a short walk south would deliver her to noisy avenues where postparade celebrations still raged.

Maybe that was why the park was so quiet. The vampires could be hunting in the streets. After a long day of green beer and whisky, the revelers would never remember what bit them.

Suddenly the brick path beside her was clearer. Brighter. She could make out individual trees and bushes. She moved quietly onto the pathway and looked at the nearly full moon. The clouds had moved away, leaving the orb bright and glowing.

A slight movement caught her attention, and her gaze lowered. To the south, a lone figure stood on top of a huge crag of granite. His back was to her. Wisps of clouds floated past him, stirring his kilt. Moonlight gleamed off his dark red hair.

Mist swirled around him, making him look ethereal. Like the ghost of a Highland warrior. Emma sighed. That’s what the world needed more of today—-brave warriors, willing to fight evil.

Sometimes she felt vastly outnumbered by the creatures of the night. As far as she knew, she was the only vampire slayer in existence. Not that she blamed anyone for that. Most people didn’t know about vampires. But she did blame her weak and ineffectual boss. Sean Whelan was afraid to pit their small team of four against a group of vampires in battle, so he had assigned them to merely watch and investigate.

Watching wasn’t enough for Emma. Not since that horrid night six years ago. She refused to dwell on it. She’d found a much better remedy than grieving. The trick to killing vampires was to find one alone in the act of feeding, then take him by surprise with one swift stake through the heart. With every vampire she turned to dust, she was one step closer to finding peace.

She patted her bag of stakes. With a permanent marker, she’d written Dad on half of them and Mum on the other half. The stakes were working great, and the death count was up to four. It could never be high enough.

She glanced again at the kilted man standing on the boulder of granite. Where had all the brave men gone? Fierce warriors who could stand alone in the face of danger.

The mist drifted away, leaving the man’s form outlined in silvery moonlight. Her breath hitched. He was stunning. His broad shoulders filled the dark sweater he wore. His kilt fluttered slightly in the breeze, revealing strong, muscular thighs. Good heavens. He would make a great warrior. Strong and relentless in battle.

He fumbled at something below his waist. Emma winced. Was he playing with himself? He lifted something to his mouth and drank. Moonlight glinted off the metal. A flask. Super. With a sigh, she turned north and walked away.

What a silly waste of her time, fantasizing about a brave Highland warrior. She should have known he was just one of the thousands of kilted, liquor-guzzling men roaming the city after the parade. Besides, in her line of business, she couldn’t afford to get sentimental. The enemy was ruthless.

A lone man came into view. Emma caught her breath. He was wearing a long black trench coat. The vampire she’d killed last night had sported one just like it. Maybe they all shopped at the same store, Vampires “R” Us. She lowered her tote bag to the ground and retrieved one stake.

He came closer. He’d be easier to kill if he was feeding, but there were no victims nearby. Emma slipped the stake into her belt behind her back. She’d lure him in, using herself as bait.

She sauntered onto the path and gave the man an innocent look. “I think I’m lost. Do you know the way out of the park?”

The man halted and smiled. “I was hoping to find someone like you.”

Right, someone to feed from. Damned bloodsucker. Emma widened her stance so she wouldn’t lose her balance when he attacked. She reached behind her back and curled her hand around the stake. “I’m ready when you are.”

“Okay!” The man untied the belt on his trench coat.

It was then that Emma noticed the hairy calves below the hem of his coat. Good heavens. He wasn’t wearing any pants.

Shit! He wasn’t wearing any clothes at all. She grimaced. Just her luck to go vampire hunting and find a flasher.

“What do you think?” The man fondled himself. “Pretty impressive, huh?”

“Excuse me a moment.” She let go of her stake and removed her cell phone from its holster on her belt. She’d call the local police to pick this guy up before he gave some poor lady a heart attack.

“Oh, is that one of those picture phones?” The flasher grinned. “Great idea! Could you put me on the Internet? Here, let me give you a profile shot.” He turned to the side so his erection would stand out.

She immediately reached behind her back. False alarm. She released the stake. It wasn’t a vampire. Even so, her heart raced, for there in front of her was the man in the kilt.