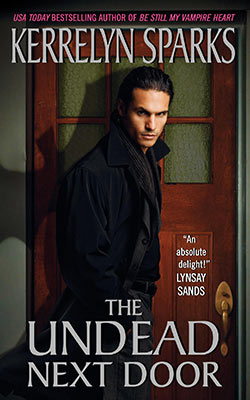 The Undead Next Door

Three signs that something is very different with your new man:

Heather Westfield has always lived a quiet life, but that all changes when she helps a very handsome, very mysterious stranger. There’s something not quite right about Jean-Luc, but still, she’s never been with a man so charming, so attractive…so wonderful. Now if only a murderous villain wasn’t after them, they might get their happily-ever-after.

“Ms. Sparks did it again. THE UNDEAD NEXT DOOR is an absolutely fascinating and spellbinding story.”

“Kerrelyn Sparks is dynamite in this newest book! Paranormal lovers are going to fall hard and fast for Jean-Luc's story!”

“There’s something here for every reader as the author deftly combines history, humor, deep emotion, and paranormal elements for a deeply satisfying love story.”

Sharon Forret, Happily Ever After 5 stars

At the Grand Opening of Jean-Luc Echarpe’s store in Texas, he watches the mortals from behind the one-way glass in his upstairs office.  He spots a beautiful woman copying his designs and rushes downstairs to confront her.  As a schoolteacher, Heather Westfield can’t afford anything at Echarpe’s fancy new store, so she decides to sew her own version of his latest designs.  Suddenly, a man comes out of nowhere and threatens to have her arrested!  He must be a security guard, a very handsome security guard…

He took hold of her arm. “I saw you copying the white gown. It is twenty thousand dollars. Since you are so interested in it, you should buy it.”

She snorted. “I wouldn’t be caught dead in that gown.”

“What?” His eyebrows shot up. “There’s nothing wrong with that design.”

“Are you kidding?” She pulled away from his grasp.  “What was Echarpe thinking? The neckline plunges past the navel. The skirt slits up to North Dakota. No woman in her right mind would wear that thing in public.”

His jaw shifted as he ground his teeth. “The models are happy to wear it.”

“My point, exactly. Those poor women are so malnourished, they can’t think straight. Take my friend Sasha. Her idea of a three-course meal is a celery stick, a cherry tomato, and a laxative. She’s killing herself to fit into these clothes. Women like me can’t dress like that.”

His gaze drifted over her again. “I think you could. You would look...superbe.”

“My breasts would fall out.”

“Exactly.” The corner of his mouth tilted up.

She huffed. “I’m not showing my breasts in public.”

His eyes twinkled. “Would you do it in private?”

Damn him and his pretty blue eyes. She had to think a moment to remember the gist of the conversation. “Are you going to arrest me or drool on me?”

What a confusing man. “I haven’t done anything wrong. I mean, other than the crab cake. But I wouldn’t have taken it if I could actually afford anything in this place.”

His smile faded. “You are in need of money? You plan to sell the designs you copied to another house?”

“No. I just wanted to make one for myself.”

“You are lying. You said you would not be caught dead in one of these gowns.”

Lying? This guy was full of rotten accusations. “Look, I would never wear one of these gowns the way Echarpe designed them. I tell you, the guy is completely detached from reality. Does he even know any real people?”

“Not like you,” he muttered, then held out his hand. “Let me see your sketchings.”

“All right. If it’ll help clear things up.” She showed him her notepad. “The first one is the white gown, but I fixed it.”

“Fixed it? I can hardly recognize it.”

“I know. It looks so much better now. I could actually wear it without getting arrested for indecent exposure.”

He gritted his teeth. “It’s not that bad.”

“If a young boy saw me in it, I’d be listed on a website as a sex offender. But the point is moot, since I could never afford the dress in the first place. I can’t even buy a pair of socks here without getting my truck repossessed.”

“This merchandise is designed for an elite few.”

“Oh, pardon me. I’ll just have Cheeves bring around the Rolls-Royce, so I can putter over to the airport and take my private jet back to my villa in Tuscany.”

His mouth twitched as he turned to the next page. “And this is the red gown?”

“Yes, but much better after I fixed it. There are four more designs there. I was coming up with so many ideas all at once, I just had to get them down before they were lost. If you know what I mean.”

It was odd. He didn’t look like the type to understand the whimsical creative process. He looked more like an athlete, but with the build of a swimmer, not a weightlifter.

Could he actually have her arrested? His strange accusations combined with his handsome looks had confounded her to the point that she’d babbled like a nervous idiot. She needed to relax and be nicer. “I’m really sorry. I didn’t mean to steal anything. Am I in trouble?”

He glanced at her with a hint of a smile. “Do you want to be?”

She stopped herself from saying yes. Good Lord, this guy was sexy. And much too gorgeous for his own good. No doubt, he had trouble finding clothes that fit those broad shoulders and long legs. He probably had problems with women, too. They took one look at him and their clothes accidentally fell off.

Aha! That’s what she’d do if he arrested her. She’d offer herself to him as a sacrifice. How noble. How ridiculous. She would never have the nerve.

He finished studying her drawings. “These are actually quite good. I can see how they would be more flattering for a woman with a...more luscious figure.”

He really liked her designs? Heather’s heart swelled with pride and joy. She liked being called luscious, too. “Thank you. And thanks for not calling women like me fat.”

He stiffened. “Why would I say that when it’s not true?”

Whoa. This man was serious trouble. Not only was he gorgeous, but he knew the right things to say to women. Double the danger. And double the fun? No, she slapped herself mentally. She’d just rid herself of one male disaster. No way was she hanging around for the sequel. “I’d better be going.” She turned to leave.

“You forgot your sketchings.”

She pivoted to face him. “You’ll let me keep them?”

“On one condition.” He glanced behind her. “Zut. We must go.”

She looked over her shoulder. A big guy in a kilt was confiscating a young woman’s camera phone.

“But I wanted a picture for my blog,” the young woman objected.

“Come.” The gorgeous security guard grabbed Heather’s arm and led her toward a set of double doors with the word Private printed above them.

“Wait a minute.” Heather slowed down. “Where are you taking me?”

“A place where we can talk.”

Talk? Wasn’t that code for something else?  “Uh, I don’t talk with strangers.”

“You’ve been talking to me.” He gave her a wry look as he pulled her through the double doors and into a hallway. “You’ve given me quite an earful.”

“Well, yes.” She glanced back at the showroom. “I just hope you’re not expecting something more.”

He halted by another set of double doors and returned her notepad. While she stuffed it in her purse, he punched in a number on a keypad. “What I am about to show you is very private.”

Oh God, she was afraid of that. “Only seen by an elite few?”

“Exactly. I know you’re a tough critic, but I think you will be impressed.”

Her gaze wandered south. “I’m sure I will.”

His soft way of saying her name made her feel all melted and gooey inside. She lifted her eyes to meet his.

His mouth curled up. “Are we talking about the same thing?”