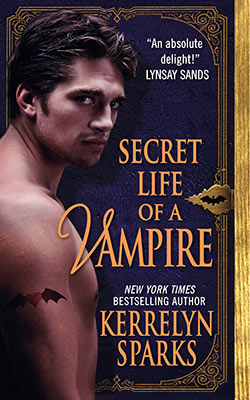 The Secret Life of a Vampire

Her modern Casanova was not quite as modern as she thought…

A typical bachelor party is all about beers and beautiful women. A vampire bachelor party is no different—except the men are drinking Blissky (whiskey-flavored synthetic blood). And no one can throw a party quite like Jack. When you’re the illegitimate son of the legendary Casanova, you know how to have a good time. But when the party gets out of hand and the cops show up, Jack has some explaining to do…if only he wasn’t struck speechless by the beauty of Officer Lara Boucher.

Lara is sure there’s something more than a bachelor party going on. What is Jack hiding? How come no one at the hotel remembers him the next day? Why does he warn her to leave him alone when he’s obviously attracted to her? As a woman, she finds this modern day Casanova hard to resist. As a police officer, she’s determined to uncover his secrets…if she can only get the job done before he seduces her.

“The character of Jack is one of the most amusingly sexy vampires that I have ever had the pleasure to fall in love reading about. I truly enjoyed reading this book from beginning to end.”

“For those of you that love the series you don’t want to miss Jack’s story and for anyone who hasn’t yet given the Love at Stake books a try… I highly recommend them. From one vamp lover to another, go out and get these today. You will not be sorry!”

“SECRET LIFE OF A VAMPIRE is an engaging and imaginative story full of non-stop action, humor and romance.”

“Fabulously written, intriguing and edge-of-your seat exciting ... I couldn't put this book down! Ms. Sparks showcases her talents admirably in this book, and it has to be one of my favorites in the series. If you're a fan a vampire novels that aren't dreadfully dark, I highly suggest you pick this (and every other book in the series) up as soon as you can!”

Excerpt from Chapter One:

Jack knelt beside Laszlo’s sprawled body. “Can I fetch you anything? A warm cup of Type O?”

“Mi dispiace.” Jack patted the Vamp on the shoulder, the only spot on the guy’s shirt that wasn’t soaked with spewed Blissky. Poor Laszlo. He’d only drunk one glass of the whiskey-flavored synthetic blood when everyone had toasted the groom, but obviously the little chemist was better at making Vampire Fusion Cuisine than ingesting it. He’d promptly thrown up all over himself.

There wasn’t much anyone could do for the poor guy, so the bachelor party had raged on in full force while Laszlo had rolled on the floor, his face clammy and pale.

“Shall I help you move to the couch?” Jack asked.

Jack frowned at the rich upholstery on the Louis XV-styled furniture. “It’s already stained.” What a mess. How would he ever clean this up?

He rose to his feet with a growing sense of doom. It had seemed like a great idea when he’d reserved an Edwardian suite at the Plaza on Fifth Avenue to celebrate Ian MacPhie’s last night as a bachelor. But now he realized the hotel’s housekeeping service would wonder how an innocent party could produce so many blood stains.

Things had gotten out of hand after Dougal arrived with his bagpipes. Ian had insisted on teaching everyone a Scottish jig. A dozen, tipsy Vamps hopping around with glasses full of Blissky had resulted in a few collisions and even more stains on the carpet and furniture.

And then the phone call had come. The ladies were at Romatech Industries, having a bridal shower, when Shanna Draganesti had suddenly gone into labor.

Before teleporting to Romatech, Roman Draganesti had lamented that he was too inebriated to help his wife in her time of need. This had caused the other guys to rally around, declaring their undying support with a rowdy fight song. Then a dozen, drunk, male Vamps had teleported to Shanna’s side to cheer her on to victory. Jack grinned as he imagined Shanna’s reaction, but the moment quickly faded. He had two hours before the sun rose to get this hotel suite back to normal.

A noise from the adjoining bedroom drew his attention. Had one of the guys stayed behind? Good, he could use the help. He strode into the luxurious bedroom and frowned at the naked VANNA lying on the bed, dripping Bleer on the satin comforter.

That had been Gregori’s bright idea. He’d arrived at the party, toting two Vampire Artificial Nutritional Needs Appliances, otherwise known as VANNA. The lifelike rubber females were sex toys in the mortal world, but for Vamps, they’d been modified with a battery-operated circulatory system. Gregori had filled the two sexy dolls with beer-flavored synthetic blood, and then, he’d invited the guys to have a bite. From the looks of the lacy clothes strewn about, the guys had had more fun undressing VANNA than nibbling on her.

A man’s voice drifted from the bathroom. “Oh, yeah, baby. Take it off!”

Jack knocked on the bathroom door. “The party’s over.”

“The party’s never over for Dr. Phang.” The door opened, revealing Phineas McKinney. “What’s up, bro?”

The young black Vamp looked debonair in his maroon velvet smoking jacket and white silk cravat, although the cavalier effect was marred somewhat by his SpongeBob boxer shorts. Like any vampire, Phineas didn’t reflect in the bathroom’s gold-framed mirror, but the second VANNA did. The dark-tinted doll was sitting on the white marble vanity, wearing nothing but red silk panties and a silly grin on her face.

Phineas’s face turned a bit red. “I was just practicing, you know. When you’re the love doctor, you gotta keep your mojo in top condition.”

“I bet you do.” Phineas grabbed the black VANNA off the vanity. “I heard you’re a real Casanova.”

“So they say,” Jack muttered. He could never escape his famous father’s reputation. “I suppose you were too busy to hear, but Shanna went into labor. All the guys left with Roman. Except Laszlo. He’s still sick.”

“No shit?” Phineas strode into the bedroom with the black VANNA clasped under his arm.

“The sun will rise soon, so we need to clean up.”

Phineas glanced at the white VANNA on the bed in a pool of Bleer. “Damn, bro. We need professionals for this. How about Vampy Maids? They clean Roman’s townhouse.”

“That would be great. Can you ring them?”

“Don’t remember their number, but they’re in the Black Pages.”

They would never find the vampire version of a telephone book in the Plaza hotel. “Do you—-” Jack was interrupted by a loud knock on the door.

“Expecting someone?” Phineas’s eyes lit up. “Maybe some real women?”

“Relax,” Jack whispered back. “I’ll use mind control to get rid of them.” He winced as the pounding on the door grew louder.

“Look, man.” Phineas tossed the black VANNA into the bathroom and shut the door. “I’ll go to the townhouse and call the Vampy Maids. I’ll come back later to help you, okay?” His body faded away as he teleported.

“Grazie mille,” Jack muttered. He strode into the living room, considering his options. He could grab Laszlo and teleport away, but the police would still come in and see the bloody mess. The suite was reserved under his name, so they might want him for questioning. No, it was better to take care of this now and use vampire mind control to erase the police officer’s memory.

Laszlo struggled to sit up. “This is terrible.” Sweat beaded his brow. “I think I’m going to puke again.”

“Hang in there,” Jack whispered. “I’ll get rid of the cops.”

“I’ll call the manager up here to open the door,” the police officer yelled.

Santo cielo. He forgot to breathe for a moment. Not that lack of oxygen could actually hurt him. His first impression—-she was stunning. His second impression—-she was trying very hard to minimize her looks. Golden red hair pulled back severely in a tight French braid. Fresh, creamy skin, a few adorable freckles, and big blue eyes. She wore very little makeup. And she was still stunning.

Her eyes widened as she met his gaze. Her mouth opened slightly, drawing his attention to her pink, sweetly shaped lips.

She came to her senses with a heart-pounding jolt that Jack could actually hear. Her mouth closed with a frown. Her hands gripped her belt. No doubt, she meant to intimidate him with her hands so close to her sidearm and baton, but he was more impressed by the way her belt accentuated her lovely hourglass figure.

She should be draped in the finest silks. She should be displaying her curves like a goddess. The fact that she was doing the opposite, covering herself from chin to toe in a mannish blue uniform, was intriguing.

The world had changed in two hundred years. If this lovely police officer had lived centuries ago in Italy, she would have been sought after by every artist who wished to immortalize feminine beauty on canvas. But here she was, trying to look tough and powerful. Didn’t she realize she was already powerful? A woman like her could bring a man to his knees and make him grateful for being there.

The male officer cleared his throat. “Sir, we received a call from hotel security. You and your friends have been way too loud and rowdy.”

“We were having a party,” Jack explained. “A bachelor party.”

“Hotel guests from three floors were calling to complain,” the male officer continued. “Your neighbors complained about a bagpipe. And some loud clashing noises. Someone thought you might be having a sword fight.”

“There’s nothing to be concerned about, officer. Everyone has left.” Jack raised his voice when Laszlo let out a low moan. “It’s very quiet now.”

“I think I heard someone,” the female officer whispered to her partner. “He sounds injured.”

“Thank you for stopping by.” Jack started to shut the door, but the male officer wedged a booted foot in the way.

He pressed a hand against the door. “We’d like to take a look inside, if you don’t mind.”

“I do mind.” Jack unfurled a wave of psychic energy. Both of you are under my control.

The male officer’s arms dropped down by his side, and a blank look stole over his face. The lovely woman stumbled back. She grimaced and pressed a hand against her brow.

I am sorry to cause you pain, he said mentally. What is your name, bellissima?

“Not you,” he told the male officer.

The female officer lowered her hand. “I knew it! There’s someone in there. Step aside, sir.”

Jack’s mouth fell open. What the hell? She was supposed to be under his control. You will not enter.

“We will not enter,” Harvey repeated.

“Of course we will.” The woman shoved at the door.

Jack was so shocked, he stepped back. And the woman barged in.