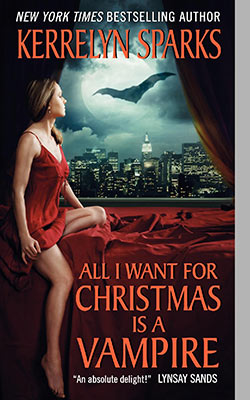 All I Want for Christmas is a Vampire

This Christmas isn’t so merry for Toni. Her best friend’s been locked up in a mental hospital ever since she told the police she was attacked by vampires, and the only way for Toni to get her out is to prove that bloodsuckers really do exist. So she’s taken a job as a bodyguard for the Undead, but she gets more than she's bargained for, especially when she meets Ian MacPhie, a Scottish rascal looking for Ms. Right.

Although Ian’s nearly five centuries old, he looks and acts like a twenty-seven-year-old hunk. How can a dead man be so damn sexy?  Could Mr. Wrong be Mr. Right?  One forbidden kiss could lead to an eternity of passion—and all it takes is one moment under the mistletoe . . .

I can highly recommend ALL I WANT FOR CHRISTMAS IS A VAMPIRE to everyone, who is looking for a funny, sexy book to warm up their cold winter evening.

Kerrelyn Sparks is witty, funny, and this series is truly to die for. Laugh out loud moments galore and non stop action, passion, and mayhem, it’s a terrific read that any vampire lover should not miss! It will get your blood pumping in more ways than one and that just might attract your own vampire for Christmas!

ALL I WANT FOR CHRISTMAS IS A VAMPIRE is a book that every paranormal romance lover should read. Luckily, you don’t have to wait until Christmas to bring Ian home with you. Run to the bookstore and grab your copy today!

I absolutely cannot get enough of Kerrelyn Sparks’ LOVE AT STAKE series! With each release, I am even more of a fan of these books… ALL I WANT FOR CHRISTMAS will leave readers laughing and wishing for their very own vampire hero to warm their Christmas season!

She made a stunning cat burglar, dressed entirely in black spandex that molded to her waist and sweetly curved hips. Her golden hair hung in a ponytail down her back. The ends swished gently across her shoulder blades as she moved her head from side to side, scanning the bookshelf.

She stepped to the side, silent in her black socks. She must have left her shoes outside the window, thinking she’d move more quietly without them. He noted her slim ankles, then let his gaze wander back up to golden hair. He would have to be careful capturing her. Like any Vamp, he had super strength, and she looked a bit fragile.

He moved silently past the wingback chairs to the window. It made a swooshing sound as he shut it.

With a gasp, she turned toward him. Her eyes widened. Eyes green as the hills surrounding his home in Scotland.

A surge of desire left him speechless for a moment. She seemed equally speechless. No doubt she was busily contemplating an escape route.

He moved slowly toward her. “Ye willna escape through the window. And ye canna reach the door before me.”

She stepped back. “Who are you? Do you live here?”

“I’ll be asking the questions, once I have ye restrained.” He could hear her heart beating faster. Her face remained expressionless, except for her eyes. They flashed with defiance. They were beautiful.

She plucked a heavy book off a nearby shelf. “Did you come here to test my abilities?”

An odd question. Was he misinterpreting the situation? “Who—” He dodged to the side when she suddenly hurled the book at his face. Bugger, he’d suffered too much to get his older, more manly face, and she’d nearly smacked it.

The book flew past him and knocked over the lamp. The light flickered and went out. With his superior vision, he could see her dark form running for the door.

He zoomed after her. Just before he could grab her, she spun and landed a kick against his chest. He stumbled back. Damn, she was stronger than he’d thought. And he’d suffered too much to get his broader, more manly chest.

She advanced with a series of punches and kicks, and he blocked them all. With a desperate move, she aimed a kick at his groin. Dammit, he’d suffered too much to get his bigger, more manly balls. He jumped back, but her toes caught the hem of his kilt. Without his sporran to weigh the kilt down, it flew up past his waist.

Her gaze flitted south and stuck. Her mouth fell open. Aye, those twelve years of growth had been kind. He lunged forward and slammed her onto the carpet. She punched at him, so he caught her wrists and pinned her to the floor.

She twisted, attempting to knee him. With a growl, he blocked her with his own knee. Then slowly he lowered himself on top of her to keep her still. Her body was gloriously hot, flushed with blood and throbbing with a life force that made his body tremble with desire.

“Stop wiggling, lass.” His bigger, more manly groin was reacting in an even bigger way. “Have mercy on me.”

“Mercy?” She continued to wriggle beneath him. “I’m the one who’s captured.”

“Cease.” He pressed more heavily on her.

Her eyes widened. He had no doubt she was feeling it.

Her gaze flickered down, then back to his face. “Get off. Now.”

“I’m halfway there already,” he muttered.

“Let me go!” She strained at his grip on her wrists.

“If I release you, ye’ll knee me. And I’m rather fond of my balls.”

He smiled slowly. “Ye took a long look. Ye must have liked what ye saw.”

“Ha! You made such a small impression on me, I can barely remember.”

He chuckled. She was as quick mentally as she was physically.

She looked at him curiously. “You smell like beer.”

“If you drink beer, then that means you’re not...”

She looked at him, her eyes wide. He had a sinking feeling that she thought he was mortal. She wanted him to be mortal. And that meant she knew about Vamps.

He studied her lovely face--the high cheekbones, delicate jawline, and beguiling green eyes. Some Vamps claimed mortals had no power whatsoever. They were wrong.

Their eyes met, and he forgot to breathe. There was something hidden in those green depths. A loneliness. A wound that seemed too old for her tender age. For a moment, he felt like he was seeing a reflection of his own soul.

She shook her head slightly, still trapped in his gaze. Or maybe it was he who was trapped in hers.

“Ian.” Footsteps approached them. “Ian, what the hell are you doing?”

He dragged his gaze away from her and saw Phineas standing beside them. “What?”

Phineas gave him a confused look. “Why are you beating up on Toni?”

He blinked and glanced at the woman he’d pinned to the floor. “Ye’re...Toni?” Their new guard was a woman?

“You’re Ian?” Disappointment flickered in her eyes before she looked away. “You’re one of them.”

That hurt. For centuries he’d been judged too young, and now, after all the pain he’d endured, he was still found wanting. His jaw shifted as he ground his teeth. “Ye have something against Vamps?”

Her eyes flared with anger. “Yes. I tend to get really pissed when they attack me.”

“She’s got a point, bro,” Phineas muttered as he adjusted the tie around his purple satin bathrobe. “You shouldn’t attack her. She’s our friend.”

Ian moved his weight off her. “Friendship is earned.”

She scooted away from him and sat up. “I’m not here to be your friend. I’m your guard. That’s all.”

He stared at her. Connor had hired a woman to guard men? This was unheard of in the vampire world. A mortal woman wouldn’t have the strength...unless she was a shifter like Phil and Howard. “Are ye—” How could he put this when shape shifters were a secret? “Do ye change a bit at a certain time of the month?”

She gave him an incredulous look. “Are you asking me if I get PMS? Are you serious?”

“Normal?” She glared at Phineas. “I nailed your ass earlier this evening.”

He held up his hands in surrender. “Don’t hurt me, sweetness. You’re a strong, beautiful hunk of woman.”

She inclined her head. “Thank you.”

“Connor told me on the phone that he’d hired a Tony,” Ian muttered. “I thought ye would be a man.”

Her eyes narrowed. “I thought you would be somewhat intelligent.”

Ian scowled. “It was perfectly logical to assume Tony was a man’s name.”

She lifted her chin. “Is it logical to attack people without talking to them first?”

“I opened it,” she interrupted. “It was as stuffy as a tomb in here, and I was hot.”

Ian shot him an annoyed look, then resumed his explanation. “The window sensor triggered the alarm, and when I investigated the matter, I found you looking at verra expensive books, dressed like a cat burglar.”

“Yeah, you do look like a hot and sexy Catwoman,” Phineas clawed at the air. “Meow! Hiss!”

Now she gave Phineas an annoyed look. “These are my workout clothes.” She switched her green-eyed glare to Ian. “And I never heard an alarm.”

“Only Vamps and dogs can hear it.”

“Phineas,” Ian growled. “I’m trying to have a conversation here.” He turned to Toni. “I’m sorry, lass, but this will never work. Ye canna guard a houseful of men. Ye see how Phineas reacts to you.”

“He’s a lot nicer than you are!” Her eyes glinted with anger. “And it’s not my problem if you’re a bunch a sexist pigs. I can do this job, with or without PMS. I beat Phineas earlier, and I would have pinned you down, too, given more time.”

Her eyes flashed with green fire.

“Good one!” Phineas shook a fist in the air. “You’re making your comeback, bro. You da man!”

“Enough, Phineas!” Ian glowered at him. “I can see why ye were murdered young.”

A laugh escaped from Toni, but she quickly squelched it and frowned at him.

She had a sense of humor? It wasn’t all that important in the grand scheme of things, but Ian was suddenly taken with the challenge to make her laugh again, or at least, make her smile. Unfortunately, he couldn’t think of anything amusing to say.

He rose to his feet and executed a gallant bow. “I apologize for attacking you. I hope I dinna hurt you.”

He offered a hand to help her up.

She regarded him suspiciously. “You’re not going to tell Connor to fire me, are you? I really can do this job.”

An uneasy feeling settled in his gut. Why on earth would a lovely mortal woman want a job guarding vampires?